This is my third card finished for my Own Magic Card Project. Like my previous cards, Swamp and Mountain, I started with quick color thumbnails. I wanted to create a low to mid key image with a lot of details in the lighter areas.

I decided to work the third one out, it seemed like a good base to work further on. I was already thinking of having skulls and broken tiles in the water to enforce the feeling of there was some kind of pathway in the past. But adding details are saved for later. First I had to make sure the right mood was set by adjusting the values. The details in the light had to pop which would create a nice contrast with the deep dark shadows.

I was still struggling to get the colors right. Finally I decided to go with a dark blue and green because this card produces either blue or black mana. I added a tint of green to keep the ghostly feeling we liked so much. The water falling down from the ceiling soon became a small waterfall and would serve great as a focal point. To pull the eyes of the viewer back into the piece I had to think of another point of interest in the left area of the image. I also needed to separate the foreground from the background more. They both shared the same values so the image felt too flat.
Finally I had to work out the point of interest more because I knew that would be the area the viewer would spent the most time looking at. 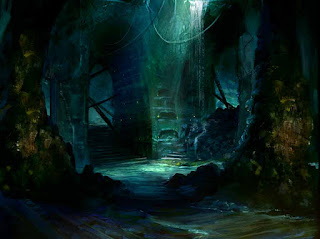 To draw the attention of the viewer, I used the principle of narrative color in this image. You use a complexity of colors to draw the attention of the viewer. It’s the same principle of using detailed areas versus less detailed areas, only now you’re using colors instead of forms.
You let your colors peak in the areas you want the viewers eyes to rest by creating a peak of saturation or high contrast.
By breaking up the negative space of the big gates I was also able to draw some more attention to that area. Eyes will automatically focus on areas with the most detail. Detail of forms, colors, values,…

Finally I ended up removing the warmer hues in the foreground because it felt somewhat weird looking. They were also very symmetrical so that too wasn’t helping at all. At the end it’s just a matter of adding other details like skulls and bones.