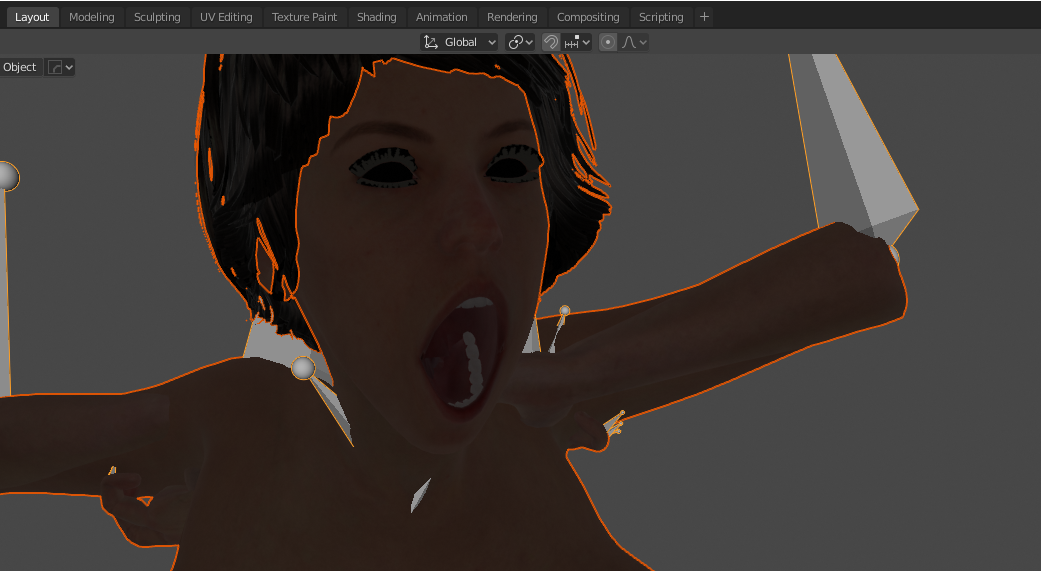 In my previous post I ended with the top image. This happened to me when importing an animated character to Blender 2.82. I’m searching for a workflow to quickly add a 3d textured (and animated) character to my 3d scenes. The animation can help me to easily choose different poses for the character in the environment so I can take screenshots of different views and do overpaints on them in Photoshop.

The fun fact is that something similar already happened to me somewhere around a year ago and I could not remember how I fixed it. In short, it took me around three days to figure everything out again. So I’m writing this overview for myself and anyone who wants to try the same, and hopefully, things will go smoother for you!

Creating an animated character in Blender 2.8

Downloading free 3d characters is easy, but finding animated and textured quality characters is something different. I remembered seeing some clothed characters available for download on Artstation a while ago. The available downloads are Marvelous Designer projects with a textured and dressed figure, no animation included.

My goal is to add an animation to the character and also make the garments follow the character.
Here is an overview of the different steps I’ll go through:

I will explain each step in a chapter. For each step in the process, I tried different options (with or without success), so I will name these too if there are any.

In this first part, you’ll need to extract a character model to add animations to.

In this YouTube video by Travis Davids, there is a great explanation of how to export DAZ3D models and how to add animations to them. I followed that tutorial for a while but then realized I could just use the provided character from the Marvelous Designer (MD) project. The DAZ3D character has a T-pose where the MD character is standing in a 45°-pose. Using the original character will save you time manually adjusting the character later.
Because there aren’t any animations yet, you can just export the character (called avatar in MD) as an obj file. There are other export options available but those gave me the wrong results.
Delete the garment and go to Export – OBJ.

STEP 2: Export an optimized character .obj from Blender to Mixamo 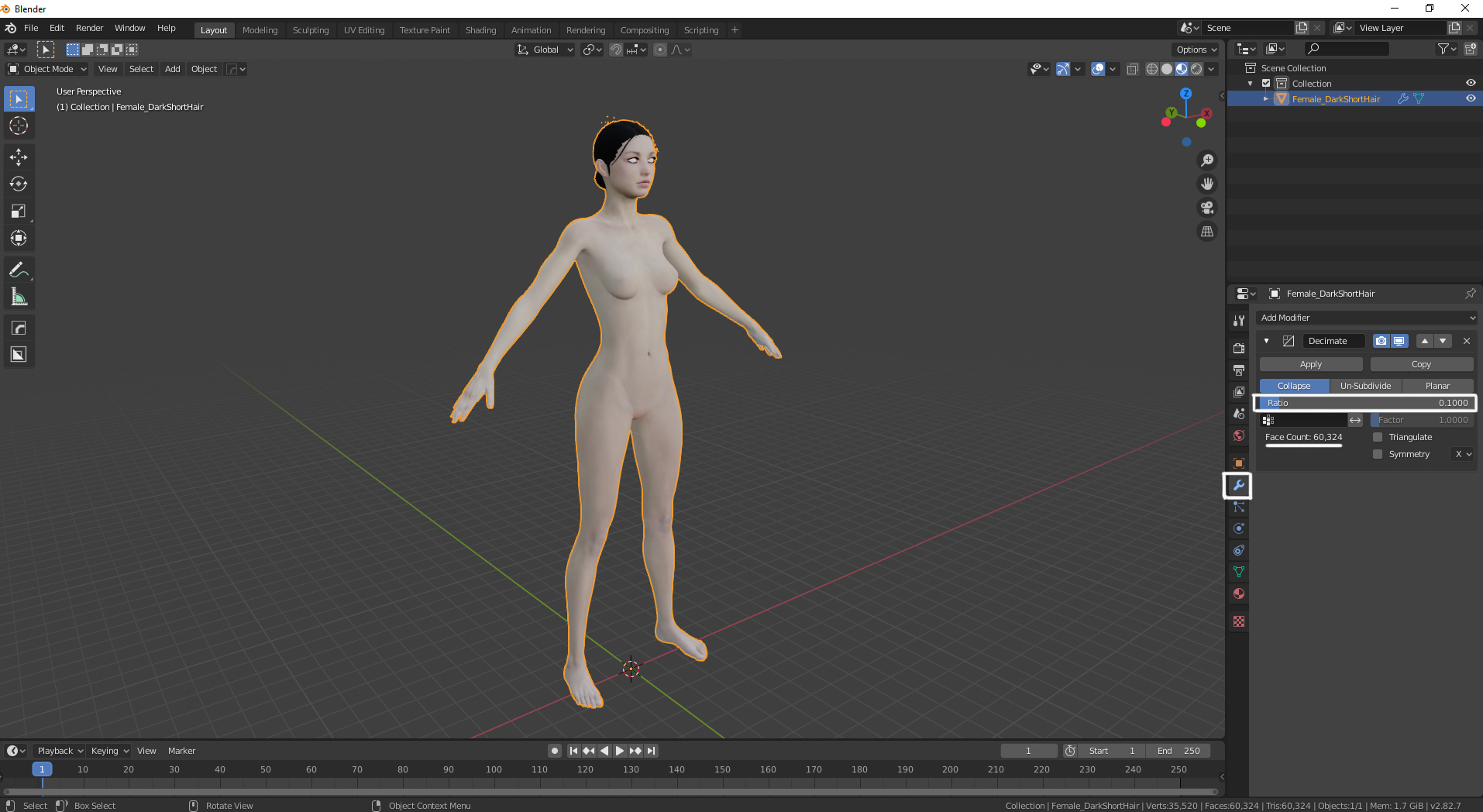 In this part, you first have optimize your character .obj to import it successfully to Mixamo. Mixamo is a website with a rigging algorithm and free to use animations. I’ve been using it already in other projects

To be able to export the character .obj to Mixamo without errors, you first have to optimize the model. In this case, that means making it more low-poly.
In Blender, select the mesh and add a Decimate modifier to it. I’m not sure what the max amount of faces is Mixamo can handle, I would say aim below 100k. Apply the modifier to take effect.
Once that is done, check if the materials of your character load successfully by switching to the Material Preview or Rendered shading. You’ll need those materials later.
For now, save the decimated version and then you’re ready to export the optimized .obj to Mixamo.

STEP 3: In Mixamo, add a rig and download an animation

In this chapter, first you need to add a rig to the character. Without a rig, there can’t be an animation. Second, you need to download our preferred animation.

Go to the Mixamo website. Log in or create an Adobe account to continue. Choose for Upload Character. Mixamo allows uploads of .obj’s, .fbx’s, and zip’s.
Zip’s are used when you want to upload a character with textures. Include an .obj and the texture files in the .zip (not .rar, it won’t work). In my case, I’m only interested in creating a rig for my character. I will tackle the texturing and shading in Blender.
Uploading a .fbx file keeps giving me errors, maybe that’s a Blender Mixamo thing, I don’t know.
See if the character is positioned upright and is facing to the front. If not, it is better to change the export settings in Blender so the character is positioned correctly when importing later.

Follow the directions to allow for the rigging algorithm to make an armature. After it finishes, you can select your preferred animation and download the animation as .fbx. with skin.

STEP 4: Add the original pose to the animation in Blender

Import the animation.fbx in Blender. Use File – Import – FBX. You want to put the scale on 100. I selected the jump animation, that is why my character is a bit higher up at frame 1.

Blender will import a greyscale character with an armature. I order to move the vertices of the character and therefore have animation, the armature is linked to Vertex Groups. You need to copy the Vertex Groups of the animated character to our textured character. This is only possible when the character meshes are identical thus having the same amount of vertices. Importing the .fbx tends to mess that up for me so you need to check the vertex count first of both meshes. In the example, while importing the character back from Mixamo, it lost 8 vertices along the way. With the Knife tool in Edit mode, you can easily add 8 new vertices.

Once both meshes have the same vertex count, you can proceed to copy the Vertex Groups data. Select your textured character first, select the grey character second. Navigate to its Object Data Properties and under Vertex Groups, click the arrow (Vertex Groups Specials).

Delete the greyscale character. Right now you need to link the armature to the textured character by adding an Armature modifier. Under object, link the object to the armature.
Select the armature, and in Pose-mode, rotating a bone will show a rotation on the character. 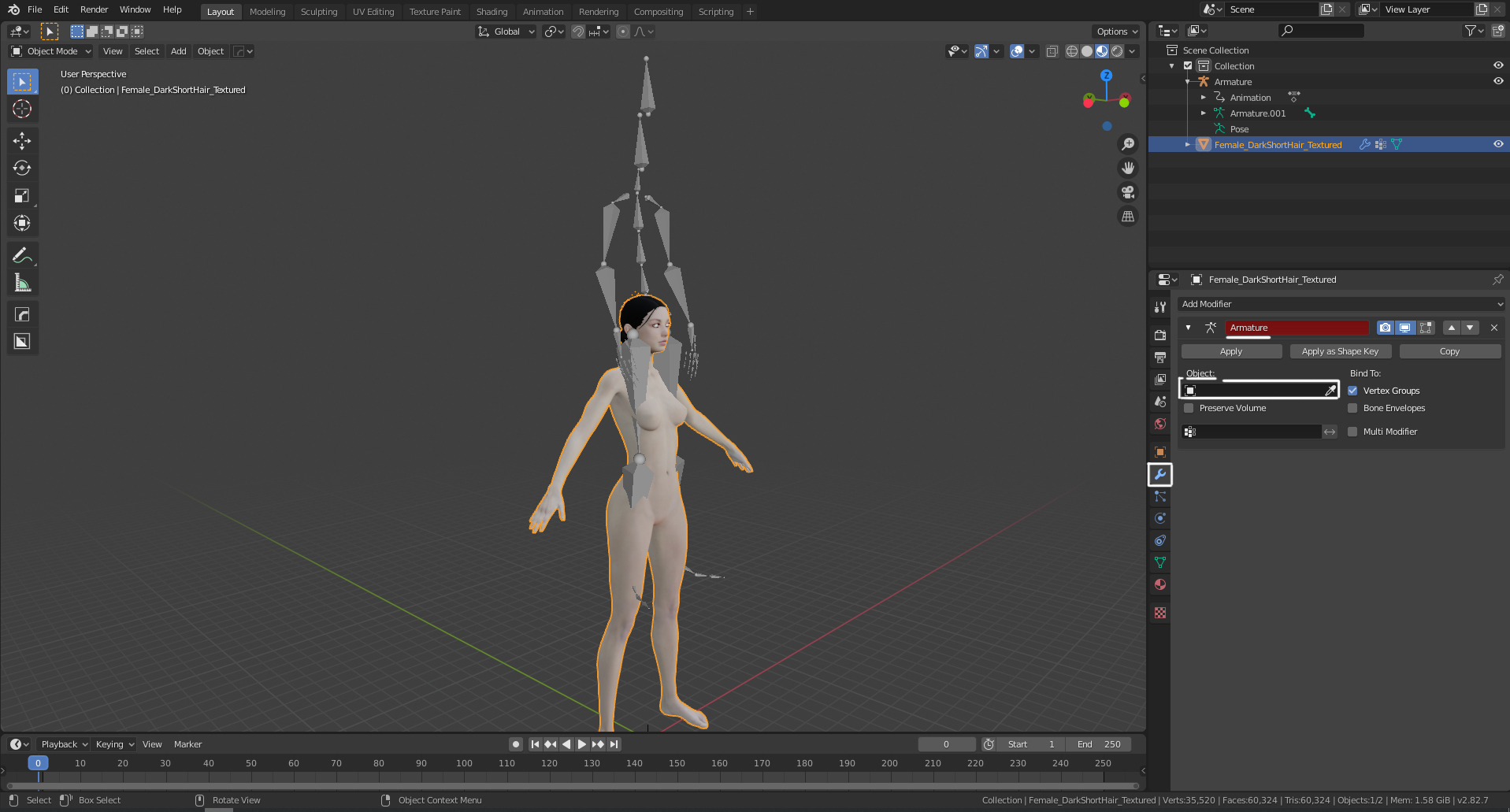 Right now you need to add the V-pose at frame 1. Still in Pose-mode, select all the bones and open up the Timeline. Move all the keys to the right. Set the timeline on key 1 and reset all the transformations by selecting Pose – Clear Transform – All. Key the reset by pressing key ‘I’. Select Available. Make sure the ‘default pose’ is set on frame 1.
Right now, the pose is reset and when playing the animation from the start, the 45°-pose will transform to your downloaded animation. Put the end of the timeline at the end of the animation. 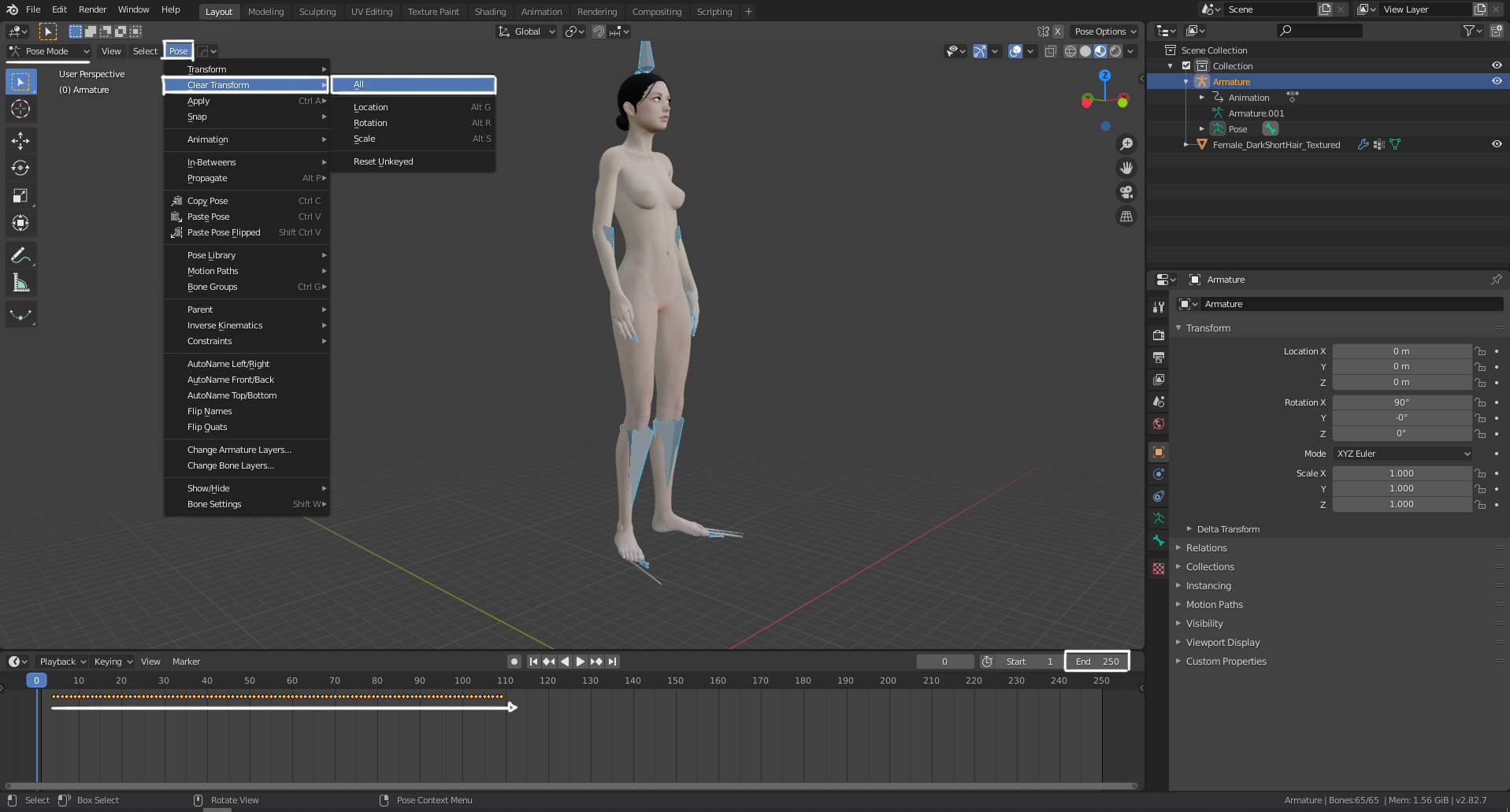 Time to export this to Marvelous Designer to create the animation on the clothing. I use Export – Alembic to export my character. Exporting as an .FBX keeps giving me scale issues in MD 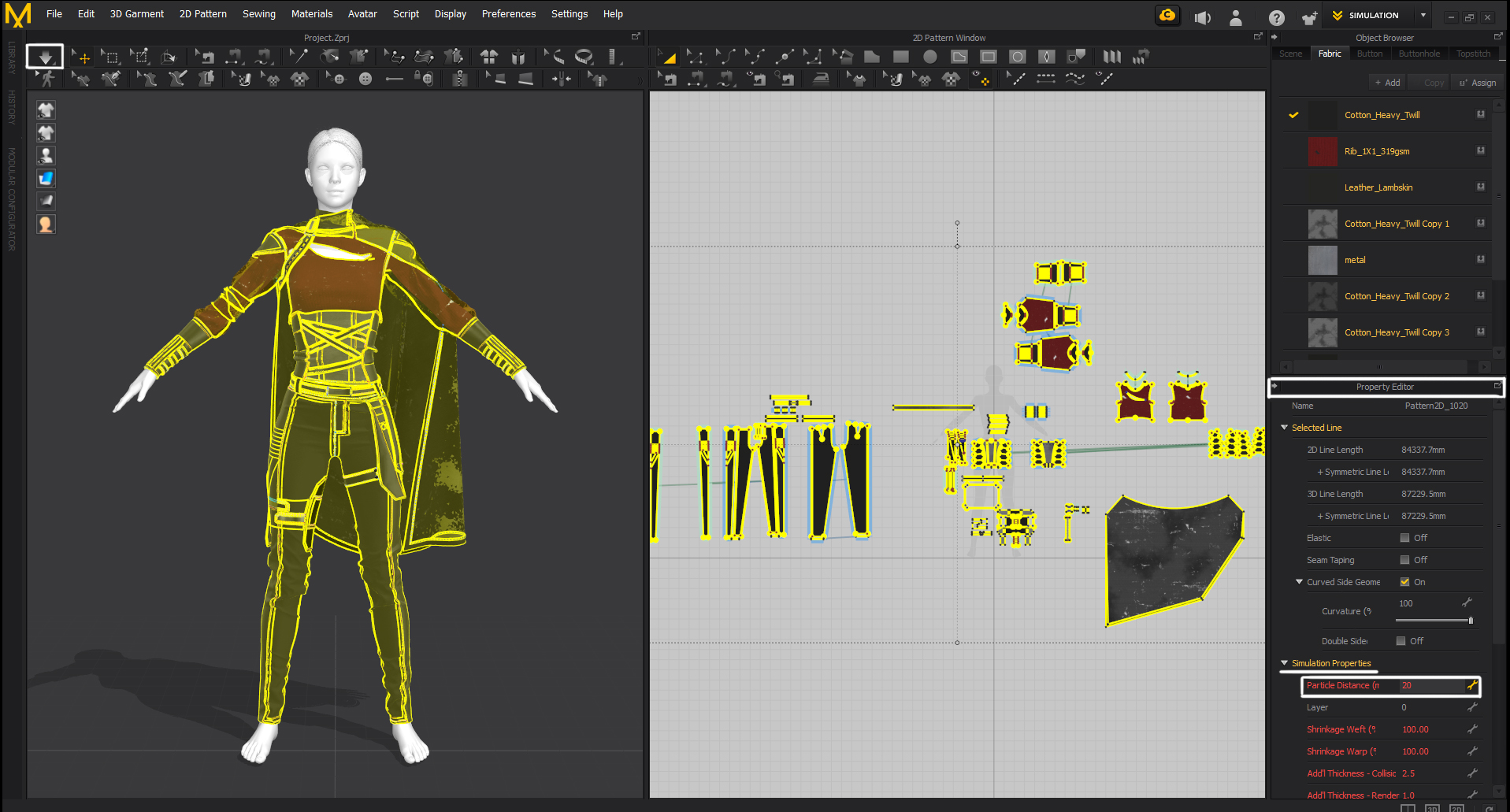 In this chapter, You’re going to animate the garments in Marvelous designer.

In Marvelous Designer, you need to change the avatar with one that has animations to it. Go to File – Open – Avatar to load your Alembic File. Select the frame rate and remember it –  you might need it in the next chapter. Make sure the clothes are fitting nicely around the avatar. If not, you want to check the scaling settings of your export and import.

To see if everything fits nicely, you need to simulate gravity on the clothes (Spacebar). Under the Simulation Properties, you can put the Particle Distance on 20 for a quicker but less strict result (Select all and navigate to the Property Editor). Once done, open the Animation viewport (Top-Right) and record the animation.

When the recording is done, export the animation. I use Export – MMD Cache. You can also try to export as a .FBX but that gives me no animation in Blender (apparently, baking the animation in Blender should be the solution but still…). Exporting an Alembic file works too but then all textures are lost and everything will be one mesh. This is ok if you don’t have any textures on your garments and you want to texture them later.

In this chapter you bring the animated figure and garment together

Exporting the animated garments will provide you with a .zip and .mmd file. The .mmd file has all the animated vertex data in it and you can use it to animate the .obj mesh that you can find in the .zip file.
Import the .obj in Blender. Make sure to select  Keep Vert Order under Geometry when importing. If the order of the vertices changes, the .mmd file will not work.

Once imported, you need to link the .mmd file. Use a modifier called Mesh Cache. Browse to the .mmd file. The mesh will flip and mirror, so change the Forward/Up Axis and Flip Axis settings.

Make sure the Time Mapping is set on Time! If the character is going through the clothes, you’ll have to adjust the frame rate of the project. Remember that I said to remember the framerate you used in Marvelous Designer? In Blender, you can change the frame rate in the Output properties under Dimensions.

After this, everything should be set and you have an animated character with clothes!

Please let me know if this workflow works for you or if you have any suggestions to it! Feel free to share your questions and progress too!